In order to authenticate to a TFS server using different credentials, you will need to delete this directory. Then when you restart Visual Studio 2012, you should be presented with the sign-in dialog box.

Because I like to be on the cutting edge of development at times, I migrated my Windows Live ID, which used the classic “@hotmail.com” domain, to a new Microsoft Account which uses the new “@outlook.com” domain. During set-up, you are provided the option to continue receiving email messages at the old email address as well as whether to store those messages received in the default “Inbox” folder or in a newly created folder aptly named the same as your previous Windows Live ID. Most importantly though, upon completion of the set-up wizard and thus officially making the user id switch, your new credentials are immediately active and the old id no longer works for authentication.

What does this mean?

Well, it means that any and all services where you use Windows Live authentication to access will need to be updated so that you are authenticating using your new Microsoft Account. This includes Microsoft’s Team Foundation Service Preview (TFSP). So when I launched Visual Studio, Team explorer displayed the error message below.

In essence, Team Foundation services are not available at the named server. Even when attempting to access TFSP through the web, my cached credentials were being passed as I was receiving the following error message from tfspreview.com. 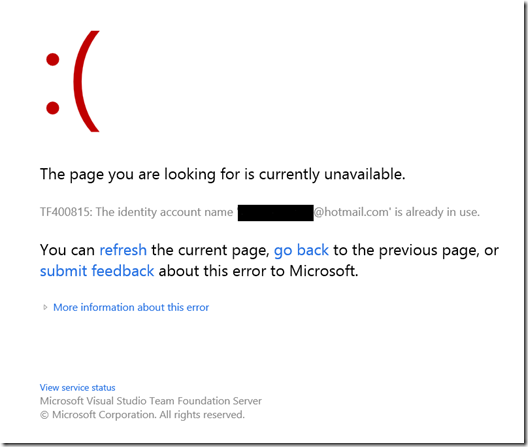 But, because I could access tfspreview just fine from my Windows 7 laptop, I knew that it wasn’t a problem with the TFSP per se, but rather my old credentials somehow being passed in automatically either by the OS (Windows 8) or Visual Studio 2012.

So I deleted my TFSP server connection in Team Explorer and attempted to add the server again, hoping that it would prompt me for the new credentials…however with no luck, I was presented with the error dialog below. 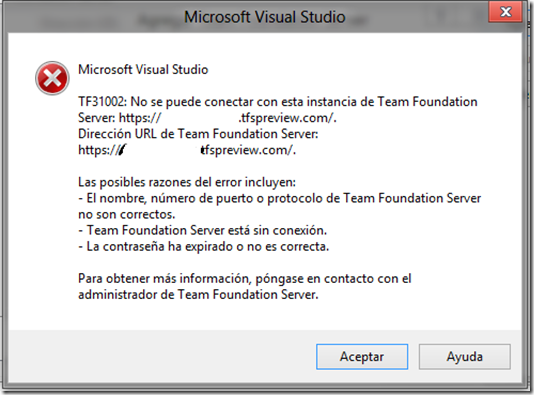 After a couple of days of searching, troubleshooting and even opening a ticket with TFSP support, I discovered a blog post that referenced the same type of issue in an earlier version of TFS and Visual Studio. Concluding that it couldn’t get any worse, I deleted the cache folder mentioned above in “the gist”, launched Visual Studio 2012 and presto…Team Explorer prompted me for my credentials.

So just to recap, if your credentials have changed and you are experiencing problems connecting to your TFS server from within Visual Studio, there could be a problem with cached credentials. Try navigating to, “localappdata%\Microsoft\Team Foundation\Cache”, and deleting the cache directory.