Have you ever found yourself presenting your project status to stakeholders and managers and their eyes seem to glaze over whenever you begin to pull up Gantt charts in Microsoft Project, roadmaps in BugNet, or your nifty Excel spreadsheet? Well, I hope that we have upgraded from the latter.

In my experience, I have found that management, senior-level management that is, is often only interested in the high-level efforts such as what the proposed project/task is, has it been deemed feasible, and it’s completion status. Taking this into consideration I began to create project team sites within SharePoint 2010 to aid in streamlining these topics and using more meaningful terminology for this group. Of course, I still use issue trackers, source control and project management tools to manage the progress of development, but I find that those tools speak more directly to the technical staff and do not sing music into the ears of high-level stakeholders.

So in this post, I would like to illustrate one way to leverage SharePoint 2010 Team Sites, along with discussion boards, lists, and workflows to aide in communications with non-technical stakeholders.

First off, I am assuming that you have some familiarity with the SharePoint 2010 interface as the images have been cropped to the specific context.

The discussion board on the main page.

When editing an item, note the various status options at the bottom.

As you can see, a discussion can have various states and it is when the discussion has been “Promoted to Deliverable”, that the workflow that creates an item in the “Application Deliverables” list will be triggered.

The Promoted to Deliverable Workflow

The Promoted to Deliverable workflow is pretty straightforward. Designed in SharePoint Designer 2010, it creates a new list item in the “Application Deliverables” list, using some of the values from the “Application Initiatives” discussion board to populate the item’s values.

I won’t drill down into those settings as when you get to this point its pretty self explanatory. But again, as you can see, the workflow checks the status of the current item, and if that status is equal to “Promoted to Deliverable”, then the workflow executes.

Now that the initiative has been discussed and approved (promoted to deliverable), it officially becomes an application deliverable. It appears in the list awaiting the assignment of a due date and a responsible person from the team.

Application deliverables are driven by the Issue Status field. 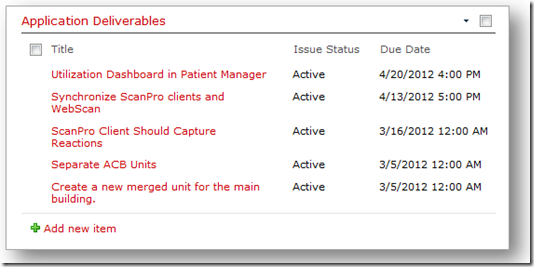 A newly created initiative begins in a “Not Started” state and is updated as the work progresses. Once the issue status is updated to a “Closed” state, then the Application Initiatives Workflow is triggered. This workflow is primarily a notifications workflow that sends email notifications to key individuals that this deliverable has been completed.

Once the notification emails are sent, then the entire workflow and request is considered closed. If a change is requested, then it begins another iteration of the entire process, beginning with a new Application Initiative. Of course, simple requests can flow through the process quickly, but tracking the work efforts and being able to report against them is still important at this level.

While it definitely took a lot longer to explain the steps than it does to complete them, the key is that the payoff is well worth it.

You really do shine when you walk into a meeting with a non-technical audience and speak their language while talking to a view such as this one. 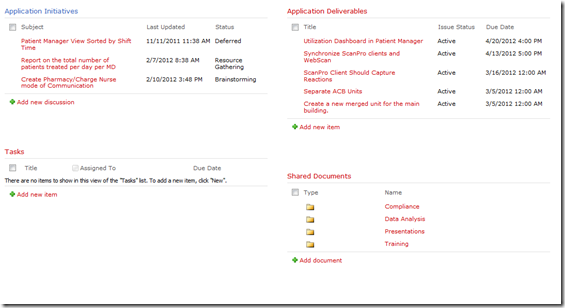 In the end, management is concerned about a few broad sweeping conditions of any project and you should be ready and able to communicate on that level.

And one disclaimer, I work on a small team where the larger resources are not always readily available, so I’m not recommending this methodology over your company’s supercalifragilistic… enterprise solution.